You are here: Home / Timor-Leste 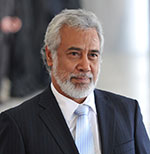 Libby Bleakley PHF is the driving force behind this RAWCS project and she is garnering support increasingly from other Rotary Clubs throughout our District.

Construction of the Centre is already under way and in a relatively short space of time, as at July 2015, Libby has raised over $70,000. Of course the builders are spending it as quickly as she is raising it!

And on her recent visit to Dili she enlisted the patronage of none other than His Excellency Kay Rala Xanana Gusmao (pictured).

An excerpt from the project documentation:

This project has been developed to establish a facility for the Timorese youth and community that will develop skills, character and leadership through educational workshops, crime prevention workshops, language courses and fitness training; to build strong social foundations and to prevent crime within the community.
This Centre will operate similar to the Police Community Youth Centre’s (PCYCs) in Australia and will encourage local police involvement. It will focus on bringing the community together to build relationships and respect with the aim of reducing crime, especially violence within families and communities. A large focus will be on gender equality and promoting respect for women. This program will also support and empower the youth to take ownership in progressing the development of their country.

The Centre will consist of two classrooms, a gymnasium, office, community meeting area, manager’s quarters and a toilet block.

The facility will offer English classes, workshops on health and nutrition, crime prevention (specialising in child protection, sexual assault and domestic violence issues), arts/craft and other educational activities. The gymnasium/drop in centre will be open to both male and females, although a designated time will be allocated to females only. The designated community meeting area will be utilised for various groups and activities.

We are currently in the early stages of the project and are continuing to fundraise. Land in Dili, Timor-Leste has been leased and our two Timorese Managers for the Project are now residing in the existing demountable quarters. We shall build in stages and anticipate starting in March. We hope to officially open the centre in early 2016.

The building pictured at right is similar to the planned Centre design.